To be a “true blue” something is to be a waschechter something in German.

DWDS had a few examples of this in use:

ein waschechter Macho – “a true Macho” – yes, you can be A Macho in German (dict.cc offers “himbo” as a translation and this does capture the pejorative sense of the word).

eine waschechte Kulturstadt – “a true culture city” – perhaps best understood as being derived from the European City of Culture designation.

waschechten Mozartfans – “true Mozart fans” – it would seem that almost anything can be combined with Fan, as in English.

When we take waschechter apart we get wasch – “wash” and echter – “more real,” “truer,” “more typical.” The waschechter combination can also mean “colorfast,” from which likely comes the implication that afforded the figurative use: that the characteristic is one that won’t “fade” or “disappear” (our own phrase “true blue” has this origin, coming from a time period where most blue dyes were fugitive). Intriguingly, in researching this I came across two phrases using gewaschen – Er ist mit allen Wassern gewaschen meaning “He’s a smooth customer” – and mit allen Wassern gewaschen sein – “to know every trick in the book” or “shrewd.” Which leaves me wondering what it might mean if you had washed everything in, say, Sekt or Chanel Number 5.

Today in a conversation about preserving fish someone was searching for the word der Tiefkühlschrank and came up with the English word “freezer” /ˈfri:zəʳ/. Since the discussion was in German, I heard der Friseur /friˈzø:ɐ̯/ – “hairdresser.” Sometimes context just isn’t enough!

Monday night I had dinner with friends. Normally we would speak German, but for a change we were using English. At some point, one of my companions mentioned “preppies” and then in the next breath mentioned hoarding food and keeping a small arsenal and I began to suspect a cross-language mix-up was taking place. I asked him what was meant by “preppie” and he said something to the effect that it was someone who believed in “prepping” for the coming showdown with the US government. I did all I could not to laugh out loud at the confusion between “preppies” and “survivalists.” I was further surprised by his initial unwillingness to accept my statement that “preppies” were not  likely preparing for an apocalypse, but if they were, it would have been the fixings for G&Ts and Brooks Brothers button downs that they would have been hoarding (moreover hunting would be involved only through the ownership of some L.L. Bean duck boots).

Dict.cc does offer a couple of translations for the adjective “preppy,” namely adrett and popperhaft and mentions that it can refer to a style of dress or to someone who was a student at a preparatory school. It would appear, however, that “The Preppy Handbook” has not been translated (dict.cc will often mention book, film and song titles when a translation exists), depriving German speakers of the chance to appreciate idioms like “parallel parking,” “fruit loop” or “blow donuts” and nicknames like the eponymous Muffy and her pals Kiki, Skip and Missy.

Frei is also a cognate of the English word “free.” Something that is frei is available at no cost (one can be more more specific and say that something is kostenfrei). In a related semantic field, there is the meaning of frei that corresponds to unabhängig –“independent” – which is a favorite word of mine as the Unabhängigkeitserklärung – The Declaration of Independence – was signed in my home town, Philadelphia.

Finally, one of the phrases I learned on my first trip to Germany in 1984 also uses frei: Ist dieser Platz frei? which means “Is this seat taken?” In this context frei means “unoccupied” or “not in use” or perhaps even “spare” if you intend to pick up the seat in question and take it to another location. I was delighted DWDS included this example sentence for the “available” or “spare” meaning of frei – Sie liest in jeder freien Minute, “She reads in every spare moment” – because it is so apt as far as I am concerned!

What a difference a “d” makes

I’ve just noticed that “bedside” and “beside” are only one letter different…which led me to some interesting German phrases expressing the notion of being “beside ourselves.”

Now, if only we could ensure that “bedside manner” always left patients “beside themselves” with joy rather than fear or rage…

Today I saw an ad for Subway’s flatbread sandwiches which reads: 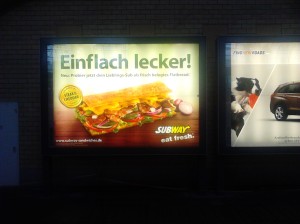 The asterisks designate the fact that einflach is not a real German word, it is a play on two of them: einfach and flach, “simply” and “flat.” A parallel construction in English would be something like “Shrimply Delicious” – a play on “simply” and “shrimp.”

It is simply wonderful to know enough German to appreciate words at play and reminds me of a joke (which I told at a Halloween party) that relies on you knowing the grammatical cases German uses:

“Do you know the names of the Werewolf’s three siblings?”
“No, what are they?”
“Your never gonna guess! They are called Genitive-Who Wolf, Dative-Who Wolf and Accusative-Who Wolf…”

For this to even get off the ground, you need to know that wer is the German word for “who” in the nominative case, and that it is inflected in the other three cases to become wes, wem and wen. You also know from the order in which the names are given – nominative, genitive, dative, accusative – that this joke is not brand new as the cases are now more commonly ordered nominative, accusative, dative and genitive, perhaps reflecting the increasingly rare use of the genitive forms.

I hope this makes the case, once again, for German humor making ample use of wordplay.

Thoughts from the Journey...

Ray's ruminations, rants and reflections on his American Idol addiction

Stories and Poems from the mind of Tristan Nagler